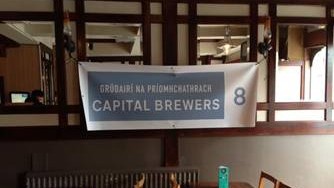 For the second time, this now annual event sought to find the ultimate “Summer in a Glass” beer.

The task of the home brewer was to produce a light, refreshing, medium body, thirst quenching and balanced beer of low ABV, i.e. a lawnmower beer. 11 beers were judged on the day which made their way from home brew clubs around the country.

The Judges were Sarah Finney, Kev O’Hare and Peter Dudley.

4 beers were selected for the Best of Show where the order of the winners was decided.

The results were as follows:

2nd Cahalbrua, with a beer that contained ginger and lime

The winners received these generous prizes:

1st – 25kg malt from The Mottly Brew, Vintage malt bag, T-shirt and Hat from Minch Malt and a €50 voucher for The Homebrewing Company.

2nd – 5kg malt and T-shirt and hat from Minch Malt, 6kg malt from The Mottly Brew

Congrats to the winners and all involved in another successful competition.

We all look forward to next year.

There are no upcoming events.

Find out more or adjust your settings.